Making spaces on our own terms.
Part of Re-Imagine Europe 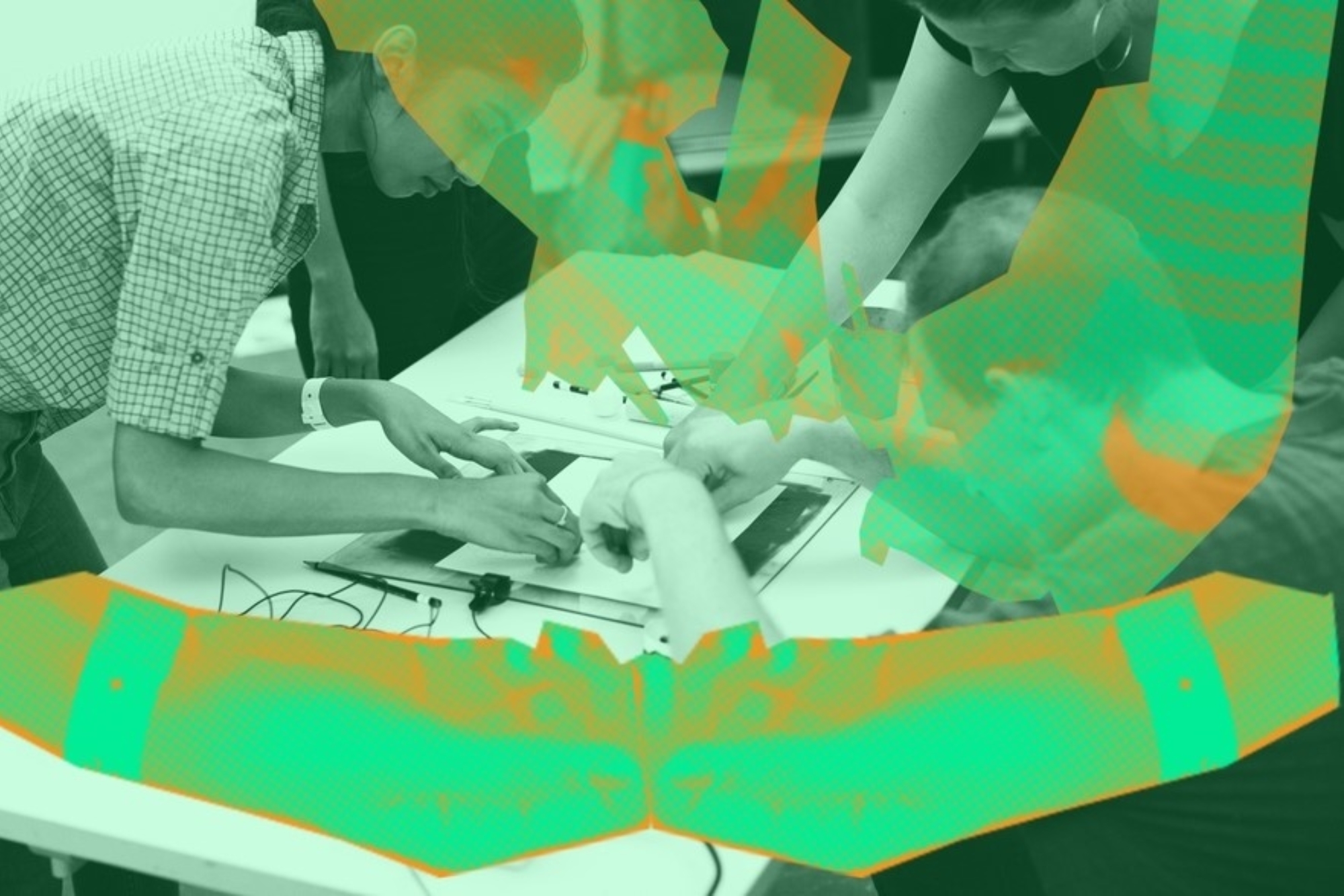 PART OF THE RE-IMAGINE EUROPE PROGRAMME
PRESENTED BY LIGHTHOUSE

A discussion about how to navigate and push against predefined words and worlds — and how to make our own spaces on our own terms. With Lighthouse Curator in Residence Eva Rowson, artists Aliyah Hussain, Anna Bunting Branch and Jordi Ferreiro, Marlborough Theatre Co-Artistic Director Tarik Elmoutawakil and Devils’ Dyke Network artists and organisers Claudia Treacher and Violeta Marchenkova.

As useable space for experimenting, sharing work or meeting disappears, and funders and organisations increasingly require our movements and work be documented and described, how do we create the spaces we need to keep our practices, networks and each other going? On the edge of huge political change, how do we protect these spaces? And, who gets to define them? The invited speakers share their thoughts and strategies — from using science fiction to identifying possibilities in the gaps — on how to make spaces on their own terms, from which to make their own rules, futures and politics.

Aliyah Hussain is an artist based at Islington Mill studios, Salford, UK. Her practice approaches themes found within feminist science fiction literature, in particular the possibilities of co-sharing space. She has released two EPs of experimental electronic music – ‘Woman on the Edge of Time’ and ‘Sultana’s Dream’ with Manchester-based cassette tape label Sacred Tapes, and has exhibited and performed nationally and internationally.

Anna Bunting-Branch is an artist and researcher. Science fictional tropes, from parallel universes to alien encounters and future worlds, inform her work in painting, moving image and writing to express different relations to feminism and its histories. Anna is currently undertaking a practice-related PhD at Slade School of Fine Art, UCL, titled ‘Practicing the Difference: Reading Feminist Science Fiction with Luce Irigaray’.

Potential Wor(l)ds is a collaborative workshop-based project between Aliyah and Anna using sound, mark-making and science fiction to explore experimental modes of communicating and different ways of world-building.

Jordi Ferreiro is an artist and educator based in Barcelona, Spain. His projects use strategies based on institutional mediation, play and experimental educational movements to interfere in the relations between institutions, art and audiences. His research into organisational models has developed recently through the collaborative project ‘como imaginar una musea?’ (how to imagine a feminist museum?) – an ongoing attempt to re-think the art institution from a feminist perspective, run on concepts of collaboration, hospitality and shared access.

Tarik Elmoutawakil is an artist and producer, and co-founder/co-director of The Marlborough Theatre in Brighton. Tarik created Brownton Abbey, the afro futuristic space-church themed performance party that centres celebrates and elevates queer, trans and intersex people of colour, to creatively address systemic problems of inequality and isolation for minoritised and marginalised communities.

Claudia Treacher and Violeta Marchenkova are part of Devils’ Dyke Network, an inclusive platform in Brighton for poets, performers and artists. The Network showcases older and newer talents amongst feminist women, gender non-binary, lesbian and queer identified people of different origins and identities – focusing on artists who have had difficult or complicated access to performing in other spaces. The Network arose from a collective desire to create a non-judgemental space for artists and audiences to grow, share, and amplify their stories, and as a strategic space from which to make politics.

The event was part of Lighthouse Curator in Residence Eva Rowson’s six month programme ‘Who’s doing the washing up – where’s the sink?’ exploring the role of hospitality in organisations. The project was a response to Lighthouse’s aim to create spaces to host new ideas, practices and communities and a shared understanding amongst local groups and independent organisations that these spaces are disappearing elsewhere in the city. Drawing on ideas of world-building and feminist science-fiction, modes of communication and organisational practices, the programme takes different forms including workshops and interventions as well as re-imaginings of the uses and workings of the Lighthouse building itself.

The programme title ‘Who’s doing the washing up – where’s the sink?’ is used to address questions that so often go unasked by institutions and grant-makers when imagining ’radical’ new models of organising and hosting: How are different types of work – from the artists to the cleaning – valued in these futures? Who gets to have a voice in these imaginings? And how do we actually change the infrastructures we’re working in so we don’t just reproduce the same models, narratives and values?