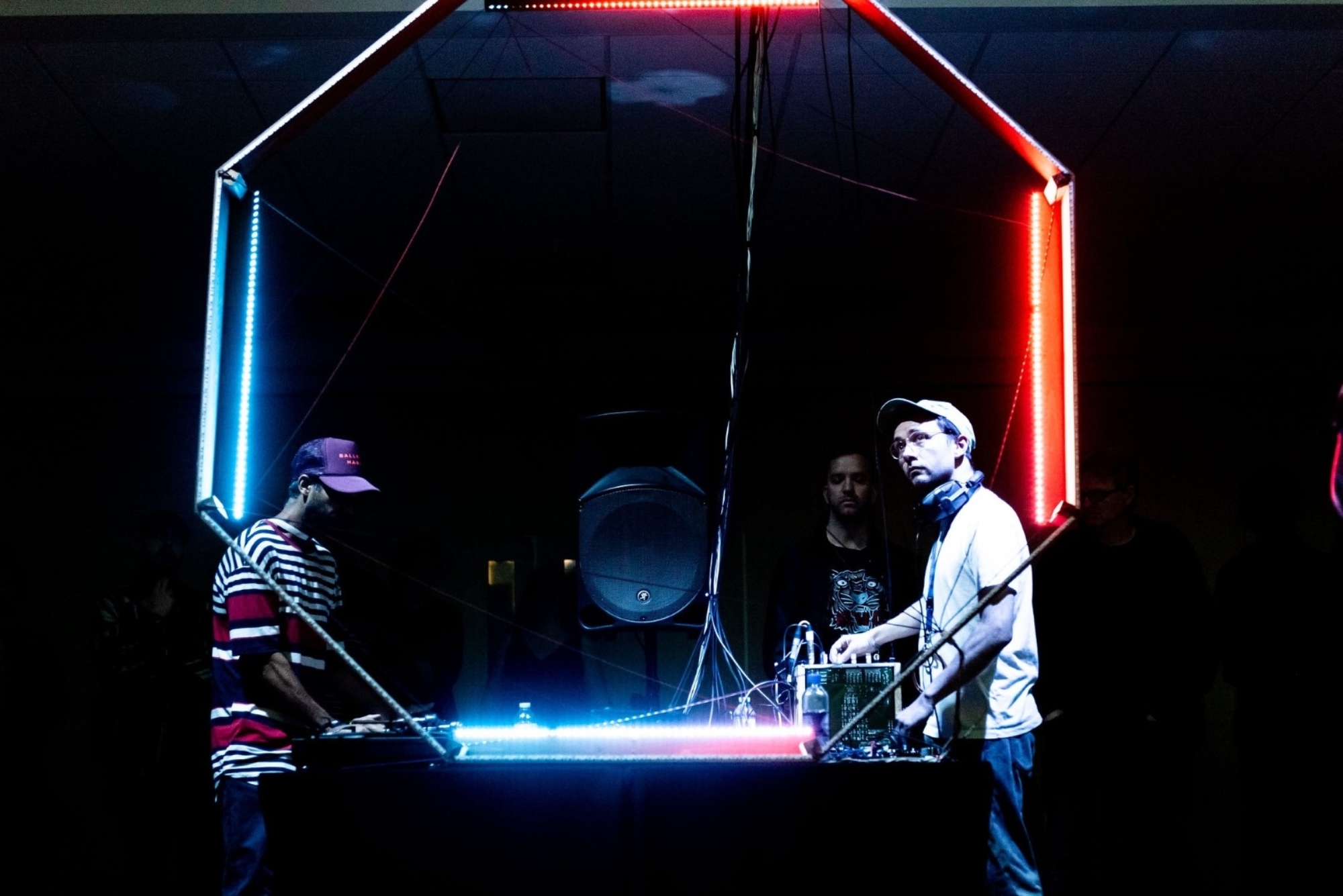 Commissioned and co-produced by Lighthouse

Last Dance: The Wave Epoch (2018). The team behind the scenes

Last Dance: The Wave Epoch (2018). The team behind the scenes

Incorporating music, poetry, incantation, archive and original video footage and homemade electronic instruments (including some built from discarded scientific equipment gifted by CERN), The Wave Epoch imagines a distant future in which the forgotten remains of the Large Hadron Collider have been rediscovered. How would a civilisation several thousand years from now interpret this vast circle carved into the landscape, with its miles of underground tunnels, cathedral-like spaces and forbiddingly complex machinery?

Taking this scenario as a starting point, the album and accompanying film are a visually-led sci-fi exploration of truth and belief, matter and consciousness, ritual and practice, and of the human quest to find patterns and order amidst the endlessly shifting realities of experience.

Originally conceived by artists Haroon Mirza and Jack Jelfs during their 2018 residency at CERN – the largest particle physics lab in the world, and home of the iconic Large Hadron Collider – The Wave Epoch is an album and film developed in collaboration with artist / musician GAIKA (Warp Records / Spectacular Empire) and others who joined them on the residency. An immersive and multimedia live version of the album has been performed at the Brighton Festival, Lisson Gallery in London and Ministry of Sound as part of DRAF’s evening of performances.

The physical release is in the form of an artwork playable on a turntable, with downloadable digital audio files.

Commissioned and produced by Lighthouse for Brighton Festival 2018. Co-created by Elijah, Lighthouse's Associate Artistic Director in 2017-2018.

Guardian - The big bangers: grime smashes into the Hadron Collider

The Wave Epoch is a unique creative collaboration between Elijah (grime DJ/Producer), GAIKA (Artist/Musician), and artists Haroon Mirza and Jack Jelfs that premiered at the 2018 Brighton Festival.

The work was devised and created at the world’s largest scientific experiment – the Large Hadron Collider at CERN, during Haroon Mirza's and Jack Jelfs' art residency. The premise of the performance is an imagined scenario where, in 2000 years time, a future civilisation rediscovers the collider and turns it into a ceremonial site, similar to Stonehenge, through music and performance. Haroon Mirza explained: "Often when we don’t understand something from the past, the automatic response is to assume it was a site of ritual or religion. Stonehenge could have been a scientific experiment..."

In Last Dance: The Wave Epoch, this futuristic scenario is enacted by the fusion of sound & performances with projections of archival footage found at CERN: among which was footage of the Royal Albert Hall used as an illustration for the structure of an atom, women in lab coats journeying through age, and a stereotypical 80’s demonstration of in-car SAT NAV. Audience members describe The Wave Epoch as one of awe, connecting the defining elements of life on earth – and moments of comedy from the more bizarre archival footage.


At the centre of the room was positioned a sculptural installation with synthesisers and mixing decks created by Haroon and Jack out of discarded Large Hadron Collider components. The soundtrack to the installation was created live with found audio morphed through these hand-built synthesisers and mixing decks. The sculptural installation/structure would 'call' to GAIKA and Elijah as they performed on the stage (Elijah on an electronic organ and GAIKA performed spoken word and improvised vocals). The audience was immersed in the performance, able to move between the artists' ‘conversation’ – a disruption to the proscenium (the metaphorical vertical plane of space in a theatre).

Also performing at Last Dance: The Wave Epoch were two Brighton-based DJ collectives: all-female DJ collective Shook, who specialise in Jersey club, footwork, hip-hop and trap, and Off-Peak, an underground club night run by a collective of artists and producers specialising in grime, dubstep and UK garage. Elijah describes Last Dance: The Wave Epoch as “a club experience with a deeper layer, full of sound, music, and colour” and as "a physical manifestation" of the idea that "whatever new technology comes in, people won’t stop gathering together for a shared experience."

Haroon Mirza and Jack Jelfs were the joint recipients of the COLLIDE International Award, a two month artistic residency at CERN, followed by a one month residency at FACT Liverpool. They invited Elijah and GAIKA to LHC to conceive and create The Wave Epoch as a special one-off improvisation. Lighthouse Artistic Director & CEO Alli Beddoes explained why she thought of introducing Elijah to Haroon: “It was important to bring the different approaches, specialisms, disciplines and voices to introduce the idea of working differently – and the magic that brings.”

Working with Elijah and Gaika opened up a new dimension to the CERN residency project for Haroon and Jack – Gaika’s presence in his shamanic costume “shifted the energy”. As Haroon explained: “artistic practice is a diluted down version of shamanism… something that cannot be described in words.”

Elijah
Elijah is a grime DJ and promoter and the co-founder of grime label Butterz. His work spans music programming, journalism, A&R and artist management. His work at Lighthouse as an Associate Artistic Director (2017-2018) shone light on the artistic, social and economic challenges and opportunities for emerging artists.

Haroon Mirza
Intertwining his practice with the role of composer, Haroon considers electricity his main medium and creates atmospheric environments through the linking together of light, sound, music, video and elements of architecture. Haroon is represented by Lisson Gallery and has been awarded Nam June Paik Art Centre Award 2014 and The Silver Lion at 54th Venice Biennale.

GAIKA
GAIKA’s music is dark yet melodic, experimental yet catchy. While drawing strongly from his Brixton upbringing and his Jamaican and Grenadian heritage, GAIKA’s sound is ultimately expansive, seamlessly weaving musical motifs, vocal flows and slangs of UK, US and Caribbean music.

Jack Jelfs
Jack Jelfs’ work uses sculpture, music, video, text and performance, with a current focus on the interplay between language, consciousness and physical matter. He has released music under various aliases and performed or exhibited at venues including Tate Modern, the Barbican, Serpentine Gallery and the Roundhouse.

The Wave Epoch was developed as part of the Collide International Award, a partnership programme between Arts at CERN and FACT Liverpool. It was co-produced by the ScANNER network (consisting of FACT and Arts at CERN, as well as Le Lieu Unique, Nantes; CCCB, Barcelona; iMAL, Brussels) in collaboration with Lighthouse. After the Brighton Festival premiere, The Wave Epoch was presented as part of Haroon and Jack’s exhibition at FACT, Liverpool. Last Dance is supported by Arts Council England’s Change Makers fund, which aims to increase the diversity of senior leadership in art and culture.