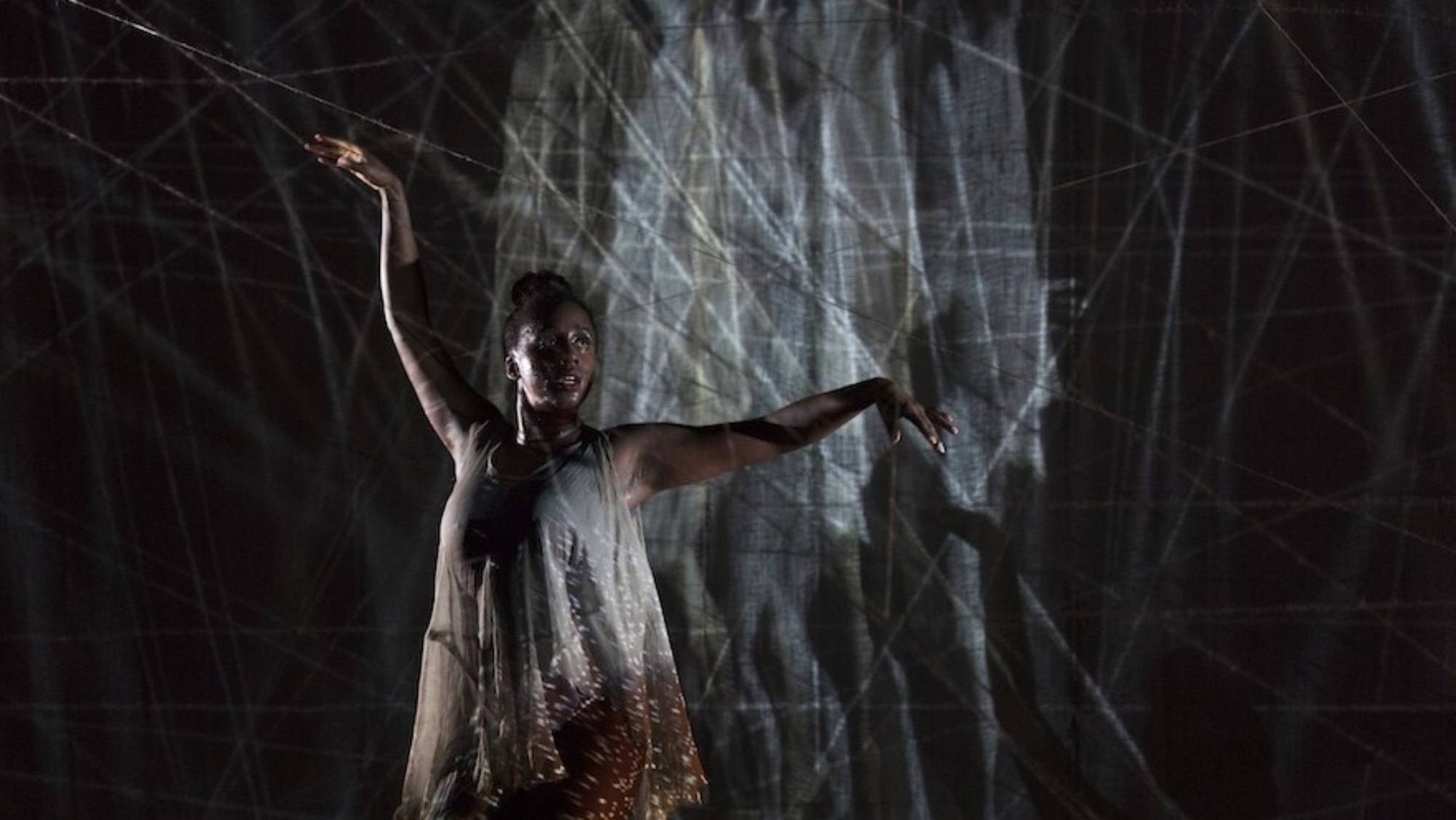 AN INTERDISCIPLINARY EXHIBITION BY NWANDO EBIZIE

Co-presented by Lighthouse and Brighton Festival

The work is inspired by Ebizie’s rare neurological disorder Visual Snow, which causes visual distortions such as flickering dots, auras and glowing lines. The audience experienced a mythical version of the disorder, entering an alternate Afrofuturist (a black perspective on the politics and culture of science fiction and technology) reality, inspired by research into the neuroscience of perception and drawing on rituals of African origin.

In the exhibition, partitions, screens and threads created a labyrinth through the space, with walls doubling up as screens where holograms and videos are projected. These architectural elements guided the audience through the space, and create the experience of Visual Snow.

Distorted Constellations​ is an interdisciplinary exhibition that combines art and science, and aims to increase our understanding of rare neurological disorders and the subjective nature of sense perception. Distorted Constellations consisted of a reception area, and two rooms. The rooms were called Install and Sensory Antechamber.

Located on the ground floor there was an experimental prototype of a sensory antechamber, designed to complement the main installation. The sensory space was been designed with the needs of neurodivergent people, including autistic people, in mind.

Elements of the Exhibition included:

The Opening Ceremony, performance and talk

A multisensory encounter presided over by Nwa-Kpa-Kpa-Ndo (one of Nwando Ebizie/ Lady Vendredi’s alter egos). An elemental journey through intimacy towards ecstatic release. Where you could Participate or spectate. Be a scientist or artist. Allow your perceptions to alter.

Nwando has explored Haitian Vodou dance as part of her extended research for Distorted Constellations – using ritual training and certain techniques; actions, songs and ritual structures to see if they could alter the consciousness of the performer. An energetic Caribbean dance workshop delving into the soothing and powerful movements of Haitian Vodou. In Haiti, dance symbolises the cohesion between the elements, between this world and what lies beyond.

Ebizie performed a visceral rage-ritual and dance piece based on mythopoetic movement of African origin and imagined neural pathways. 20 Minutes of Action is inspired by retellings of European and African folk tales and rituals about women. The performance featured an analogue electronic score and immersive projection, and took place within the Distorted Constellations installation.

A relaxing, immersive performance exploring Autonomous Sensory Meridian Response in an intimate setting. Storytelling, touch and movement provide a journey into the psyche to find out if you experience ASMR – a relaxing, tingling sensation across the scalp and spine in response to particular triggers.

In 2014, Nwando Ebizie became aware that she experienced a different reality to that of everybody around her. She realised that she was the only one who constantly saw the space around her full of swirling coloured, translucent dots (like a George Seurat painting), glowing lines. She realised that she had Visual Snow – a seemingly rare neurological disorder that the science community is just beginning to understand.

Neuroscientist Dr Francesca Puledda explores the rare neurological syndrome, Visual Snow through a talk during the Closing Salon. The night was closed with a DJ set by Nwando/Lady Vendred’s alter ego – Nwa-Kpa-Kpa-Ndo.

Nwando Ebizie is a multidisciplinary artist whose work combines performance art personas, experimental theatre, neuroscience, music and African diasporic ritualistic dance. Carving out her own particular strand of Afrofuturism, she combines research into the neuroscience of perception (inspired by her own neurodiversity) and an obsession with science fiction with a ritualistic live art practice.

She has curated happenings for Wellcome Collection and released records supported by Gilles Peterson. She has performed in Tokyo (Bonobo), Rio de Janeiro (Tempo Festival), Berlin (Chalet), Latvia (Baltais Fligelis Concert Hall) and Zurich (Blok), as well as across the UK from Home MCR to Barbican to Southbank Centre. Her most recent project, her first solo exhibition, took the form of a ritual immersive tech landscape and was presented as part of Home MCR’s Push festival at Caustic Coastal.

Distorted Constellations is co-presented by Lighthouse and Brighton Festival, with support from Re-Imagine Europe, co-funded by the Creative Europe programme of the European Union. The project also received funding support from Arts Council England.

Distorted Constellations was originally commissioned by Eclipse and HOME as part of Slate: Black. Arts. World. Funded by Wellcome Trust and Unlimited, celebrating the work of disabled artists.