TUOMAS A. LAITINEN IN CONVERSATION WITH LIGHTHOUSE

READ OUR IN-DEPTH INTERVIEW WITH TUOMAS ABOUT MOLECULES, CONCEPTS OF REALITY AND HIS ARTISTIC APPROACH IN PROTEAN SAP. 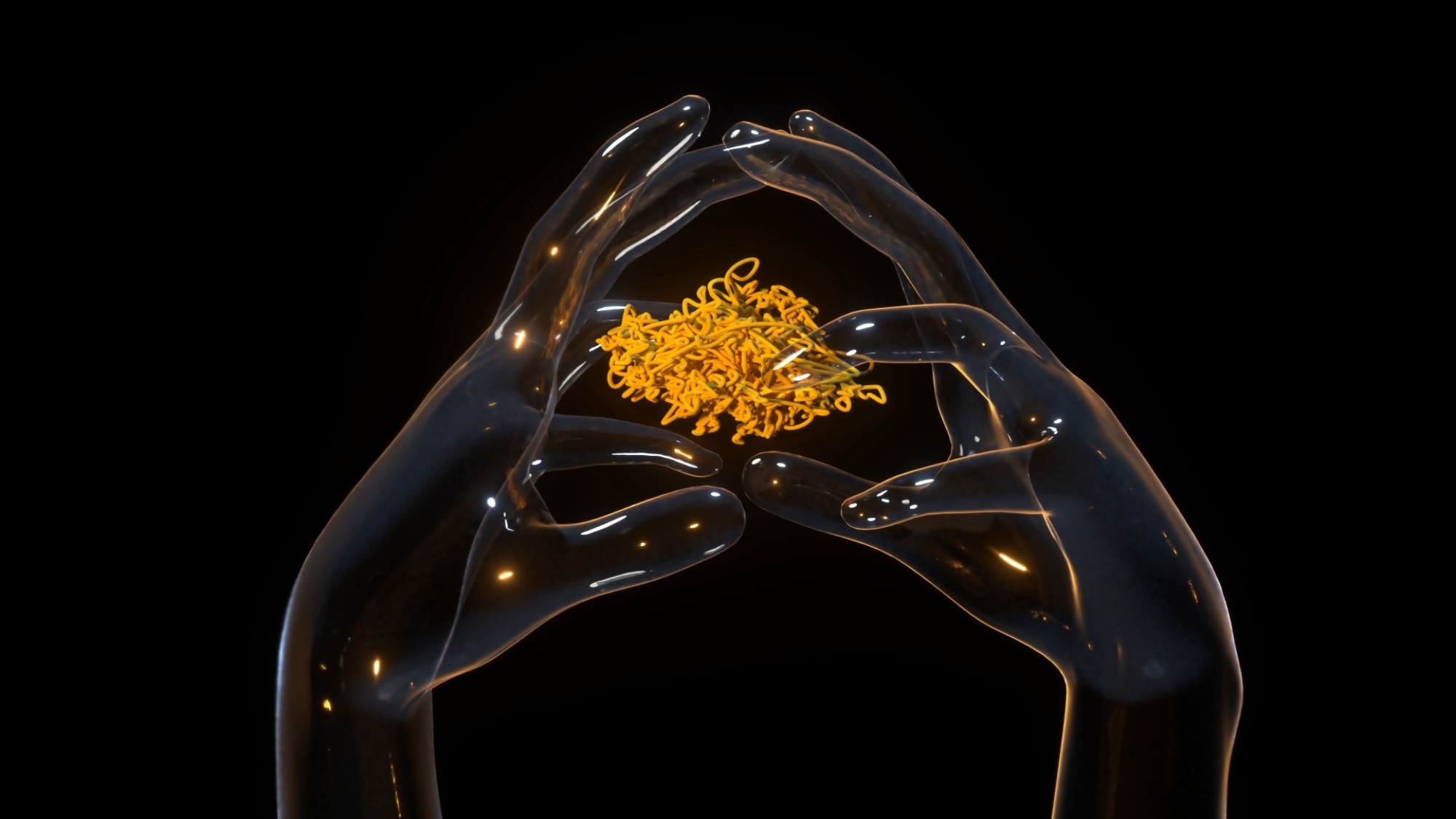 Tuomas A. Laitinen is a Finnish multidisciplinary artist working with moving image, sound, light, glass, chemical and microbial processes, as well as algorithms, to explore the entanglements of multispecies coexistence.

Protean Sap (2020) is a work that creates a strange, dream-like reality where geometric formations encrust objects and bodies, paired with a mysterious seer’s text. The forms are drawn from protein chains of viruses, bacteria, and microbial life. These shapes are then changed through simulations into masks and ceremonial artefacts which are morphed in a hallucinatory way. You can find out more about the commission here.

We joined Tuomas to talk about the making of Protean Sap in more depth.

LH: The work features the character of a seer, who draws a connection between the audience’s present, our microbial past, and our potential futures. Could you talk about the significance of the seer, and any references that you used to develop this character?

TL: The seer is connected to the idea of a constant yearning to predict the future; to give weather forecasts, predict economic fluctuations, or predict the warming of the planet and its consequences. But then, this also extends to the question of the tools that are used for these processes.

In some way, this is also the way that the brain operates, trying to predict situations from learned models and find a course of action accordingly. Here, the seer is a fictional character uttering recipes, both connected to the desire to gain insight into the future, and the ways to accommodate this need. Of course, predictions might happen by quantum computing of a vast amount of data or an act of prophecy (and the willingness to believe in it), but the desire seems to be there whatever the tools might be.

on representation, abstraction, and narratives

LH: The video work is, by its nature, linear, and so an audience’s instinct is to search for a story, or construct a narrative; the AR elements can be experienced without context, as virtual objects. How do you feel about narrative storytelling in art, and what is the relative importance of naturalistic representation and abstraction in your work?

TL: Most of my practice is based on transparent and translucent materials and the process of layering those materials. So often things are seen through other things, as a way to realise images that are non-essentializing, and borne out of a process of coexistence. Naturalistic is not really in my vocabulary since then one is faced with the problematic question of what is natural and non-natural. I am trying to advocate ideas that push away from this binary mode.

This approach also affects how the narrative can happen within the work; not as a linear process, but through an orientation that is more looking towards a depth-axis, a certain kind of translucent variable thickness, that either reveals or hides, depending on the position of the viewer.

Most of the time, I see the idea of narrative through a granular world-building process; a creation of an ambience, and then some particular events appear to be possible in this world. The storyline is then more like points spread along the spaces of the built world. And the mediators, the things that one looks through, are the critical parts, the mutating forces. And of course, in this particular case, our microbial symbionts are crucial catalysts for the narration.

I am interested in this idea of looking at ecological processes in a more limited space. In this work, one of the narrative modules is the tide pool, and this is a constantly mutating ecosystem that is also researched in relation to climate change because the effects of the change are visible in a more ‘comprehensible’ time scale.

on influences and recipes

LH: You tend to work broadly, and different works come from your explorations and discoveries. Your commission incorporates different strands or threads that weave the commission together, can you tell us about this?

TL: I usually tend to approach research and work in a very modular or granular way. I admire Ursula K. Le Guin’s novel Always Coming Home, which is a fictional anthropological account where the narrative is built from an ambience that emerges from tiny snippets of information, recipes, poems, songs, and spells.

The recipe is an important metaphor here. In the recipe of this particular piece, scientific knowledge is seen side by side with mythological imagery. I draw ideas from alchemy and medieval notions of body fluids, where substances were thought to mix and transmutate into something else. These ideas are also present in the ways that the work was produced. I am often trying to create a system that can contain a lot of mixed grains or spores that are then spread through various means.

There are a few starting points that were important at the beginning of this process. I have been researching Protein Data Bank, which is an open-source platform for scientists working with macromolecular protein models, the building blocks of life. These chains are a structural view of biology, and they are also used actively in the research on COVID-19. As a loose reference to my previous project Sensory Adaptation Devices (2015), which were glass masks that one could wear, I set out to create virtual augmentations that show our bacterial partners as ceremonial masks. These images come from point clouds indicating the places of amino acids in protein chains, and I used various tools to create connections and simulations from the data.

You can see these chains both in the video and in the augmented reality work. This idea of a mask and a body augmentation is replicated in the video, where these protein augmentations are embedded in the bodies of various life forms, and computer-generated sculptural objects. The usage of augmented reality technology really comes from this idea of looping our microbial companions back so that they can be used as ‘accessories’ in the ‘virtual’ space. Wearing your own body, perhaps?

on new ways of working

LH: As well as exploring new ways of working, you have harnessed immersive, responsive, and interactive technologies – making this new work surrounded by a global pandemic encouraged us to seek out different routes of commissioning but also new directions of technologies for you, tell us more about this.

TL: Technologically speaking, I use non-destructive node-based simulation workflows, and this allows me to change the information flow within a recipe so that I can intervene conveniently in any parts of the system. And as it is with complex systems, the sum is (or at least often seems like it is) more than its parts. So when I change a parameter in one node in the middle of the information chain, it can have an immense effect on the growth of the whole organism. This process of gradually building the (net)work that generates the work can be seen as a study on the interdependence of the systems of reality.

I end up in a situation where it is harder to decipher the world and its processes by just looking at its immediate effects and appearances. This idea relates to some interpretations of quantum physics, where reality is not really what it seems to be; the observed entity is changing its behaviour when it is under observation.

Maybe this sounds a bit abstract, but at the root, it just means that I am trying to gravitate toward a heightened sense of care for every ‘molecule’ of the organism, every ingredient of the spell. For me, this ‘sensing’ is what creates the emotional register of a given work. The feminist microbiologist and theorist Deboleena Roy talks about this idea of “Feeling around for the organism”, and I think that this is also an expression that I am trying to explore with my works.

on pandemic and mediation of knowledge

LH: Can we talk about protein chain, AR and language in the work? The film seems to take us on a journey through rituals and transmutations - has the current pandemic influenced this commission?

TL: Our entanglement with microbes and bacteria was very much present in my work before the pandemic. By using the biological macromolecular structures for this particular narrative, I am trying to look at technologies of imaging and how these technologies change the reality settings of the world. I have been thinking a lot about how a seemingly individual body is, in fact, many bodies: a complex symbiotic bundle. The notion of ritual is quite important in this work, and since knowledge is always very much mediated by various tools, it is interesting to try to find the conducting forces that are helpful in this strange situation. The rite of passage, whether personal or collective, is always important when entering a new era, and at the same time figuring out the remains of the old era, and what those remnants could mean in the possible future. 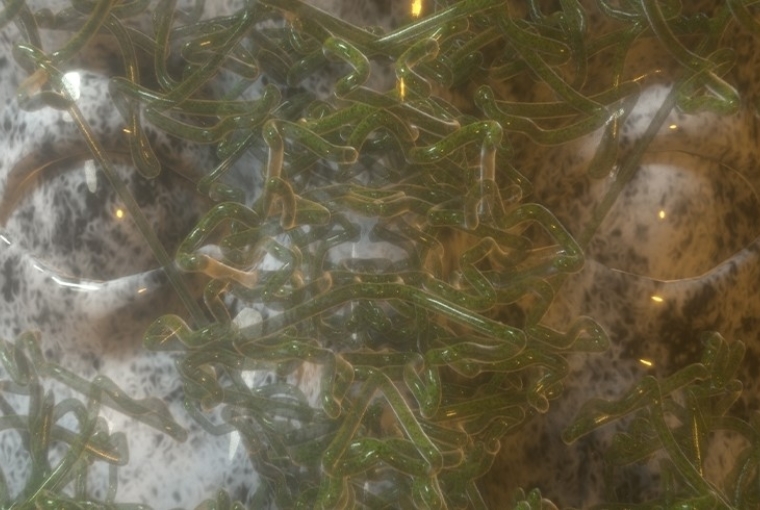 Protean Sap is a co-commission from Lighthouse, Daata and The Finnish Institute. Lighthouse is part of Re-Imagine Europe, which is co-funded by the Creative Europe programme of the European Union. Re-Imagine Europe is initiated by Sonic Acts (NL) and coordinated by Paradiso (NL) in collaboration with Elevate Festival (AT), Lighthouse (UK), Ina GRM (FR), Landmark / Bergen Kunsthall (NO), A4 (SK), Disruption Network Lab (DE), Ràdio Web MACBA (ES), Urban Paradoxes (NL) and Kontejner (HR).