Playful, inspiring and timely, The Long Progress Bar is a two-day festival of radical imagination that explores new methods of empowerment through collective action, art, culture and technology.

Ever wondered what a ’social clinic for the future’ might look like? How data mining can be used to create plays? Are you happy to be a member of the so-called Precariat? This is an open platform to discuss some of the most interesting questions facing us today. From basic income and social innovation, to the art of engineering and direct democracy, the festival responds to real-world issues and is a chance to hear new ideas, take part in conversations, and meet the people shaping our world.

“The Long Progress Bar is one of the more unusual festivals to appear on our radar this year…and they’ve lined up an intriguing selection of live music, talks, screenings and workshops.” FACT.

DAY 2 – Friday 4 September 2015
A chance to meet many of the guests from Day 1
Attendees become festival participants via a series of caffeine-fuelled conversations, informal Ask-Me-Anything sessions and workshops.

Paul Mason is an award-winning journalist and broadcaster, and currently Economics Editor at Channel 4 News. He is also the author of several acclaimed books, including the recently published PostCapitalism: A Guide To Our Future, a guide to our era of seismic economic change, and how we can build a more equal society.

Basic income is a guaranteed minimum income, on top of which, people can earn an income by working, just as they do now. Think it would work? Economist Guy Standing does, and he wants to tell us why.

Guy Standing has written several books and papers on the subject, notably The Precariat, The New Dangerous Underclass – a significant global phenomenon, highly visible in the Occupy movement. He is Professor of Development Studies at School of Oriental and African Studies (SOAS), University of London. An economist, with a Ph.D. from Cambridge University, he is a founder and Co-President of the Basic Income Earth Network (BIEN), an NGO promoting basic income as a right, with members in over 50 countries. In 1995-96, he was Research Director for President Mandela’s Labour Market Policy Commission.

Since 2009 he has performed as both a live act and a DJ, playing regular headline shows internationally. His debut album Classical Curves was released to much critical acclaim, appearing on end of year lists including The Guardian, The Quietus and Resident Advisor in 2012, and its 2015 follow up, Dream A Garden, was championed in The Evening Standard and The Guardian, amongst others. Latham also currently works as a songwriter, producer and remixer for artists on XL, Sony and Domino records.

As well as touring the world to perform and exhibit new work, Holly is currently candidate for doctoral study in Computer Music at Stanford University. She received her MFA in Electronic Music and Recording Media at Mills College. While at Mills she won the Elizabeth Mills Crothers award for Best Composer in 2010 for her vocal generated piece 195. Her 2014 single Chorus was named as a Best New Track by Pitchfork who stated “few artists have managed to meld the dark thump of techno with the intricate constructions of post-minimalist new music quite like Holly Herndon.” Earlier this year she released her second album Platform, to great acclaim.

Described as “a social clinic for the future, rethinking monasticism and hackerspaces to prototype a network of spaces throughout Europe,” It is an ambitious response to the challenge of bridging the gap between working to make a living and working to make meaning, and implements radical forms of social innovation and collaboration in Matera, Italy, with programmes to improve local life, including free tech education at OpenTechSchool, co-run by Kreutler.

The work of artist and writer Zach Blas engages technology, queerness and politics to respond to technological control.

Blas has exhibited internationally including at the Museum of Arts and Design Biennial, New York, and transmediale, Berlin, and was in 2014 selected by Hito Steyerl as a 2014 Future Great in Art Review. His projects include Facial Weaponization Suite and Face Cages, which explore the inequalities technologies propagate. His current work Contra-Internet, is oriented from a feminist and queer perspective and unites these political positions with a hacker ethos. The aim – to function as a framework for refusing the neoliberal logic of ‘the Internet’, while building alternatives to its infrastructure.

The work of contemporary artist and musician TCF explores themes of code, cryptography and musical composition through the use of visual, sonic, built and written concepts.

TCF (aka Lars Holdhus) creates a world that draws references from musique concrete, hardstyle, hardcore, poetry and digital artifacts. His practice shifts between art exhibitions and performing music pieces. He has exhibited widely, including at HHDM in Vienna, Vault in Berlin and Polansky Gallery in Prague. Recent work explores the cryptographic theme, consisting of digital and physical content containing the necessary keys to unlock its full meaning. 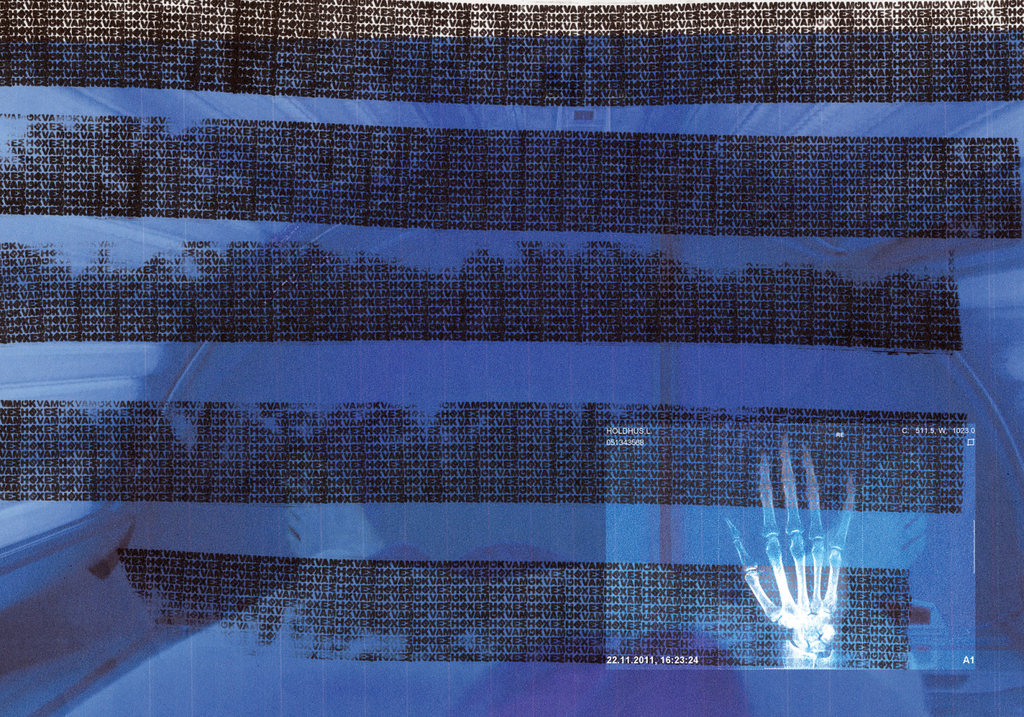 He has most recently created a series of science fiction plays from data mining his audience, produced a tool that creates concrete music from browsing habits, and created Saga, a software that allows artists to claim each distinct space where their work is published online. He is a regular musical and conceptual collaborator with Holly Herndon, releases work with Berlin based label PAN, and previously served as Director of Programming for Gray Area in San Francisco.

The work of artist David Blandy highlights our relationship with popular culture and investigates what makes us who we are.

Utilising the image in the digital world, Blandy’s works have taken the form of the YouTube tutorial, music video, television series, anime and the narrative sections of computer games. His latest work Hercules: Rough Cut will be screened at the festival. The work, which The Guardian says “sees him move far beyond the 21st century” plays on the rap music video format to make a powerful comment on capitalism.

“Ours is a world in vertigo. It is a world that swarms with technological mediation, interlacing our daily lives with abstraction, virtuality, and complexity. XF constructs a feminism adapted to these realities: a feminism of unprecedented cunning, scale, and vision; a future in which the realization of gender justice and feminist emancipation contribute to a universalist politics assembled from the needs of every human, cutting across race, ability, economic standing, and geographical position.” – an extract from the Laboria Cuboniks xenofeminist manifesto.

Katrina Burch
Katrina is an independent philosopher, an electronic musician, an archaeologist and a sound artist (performing under the name Yoneda Lemma – see below). She publishes with The Passive Collective, MIT Press, Merve, and Punctum Books (upcoming) and has exhibited at V4ULT, Berlin; La Chène, Paris; and Tate Britain, London.

Diann Bauer
Diann Bauer is an artist whose work deploys a language of visual force across disciplines including drawing, sculpture, painting, printmaking, installation, architecture and video. Conceptually led and visually driven, her work rearranges the given picture of the present time to make a new sense more fitting to the puzzling complexity of our contemporaneity.

As well as Laboria Cuboniks, Bauer is involved in several on-going collaborative projects including Fixing the Future, an online forum taking up strategies in economics, theory, philosophy, and art, to provide useful alternatives for the future, and to do so as an imperative. She was also a member of Real Flow, a research and development project for the systematic reorientation of art and finance towards the collective social good.

Sound artist, Yoneda Lemma’s most recent projects within philosophy and sound are textual and musical compositions that interweave philosophies of decay with the erotic-synaesthetic encounter in artistic practice.

The work of design and research studio Metahaven reflects political and social issues in graphic design objects and media.

The group’s 2010 publication Uncorporate Identity investigated what the International Herald Tribune called the “purpose and value of design in a neurotic and treacherous era of geopolitical instability”. Metahaven’s projects include Black Transparency, a multi-year investigation into the relationship between transparency and secrecy. As part of this project, Metahaven designed a set of merchandise for WikiLeaks that were sold by the organisation to circumvent a financial blockade disallowing the organisation to receive donations via other means. In 2015, Metahaven will release The Sprawl, a serialist web documentary on internet, geopolitics, and propaganda, co-commissioned by Lighthouse and The Space.

Benedict Singleton is a strategist with a background in design and philosophy.

Published later this year, his book The Long Con provides an alternative history of design through the concept of the plot. Singleton also regularly writes on the politics and philosophy of technology for publications like Architectural Design and E-Flux, and speaks on his work widely at venues including Tate Britain in London, Parsons in New York and Transmediale in Berlin.

Described by Vice magazine as a “beloved internet curmudgeon,” he is prolific on social media and posts most days to his blog Morning Computer on subjects including the economic disaster in Greece, new, and old, books, plays and films or simply being hungover.

His graphic novels have been picked up for film and TV with Global Frequency being developed for television by Jerry Bruckheimer and Fox and Red being adapted into the film starring Bruce Willis and Helen Mirren. His next novel Normal, a very near-future techno-thriller, is published in 2016.

For The Long Progress Bar, Ellis will be, in his own words: “conducting short near-backchannel conversations with the participants, like some nightmare chat show host, distributed in near-real time as audio files: [acting as] both a remote unit to the festival, and [providing] an audio archive of what was on everyone’s minds that day.”

ABOUT THE LONG PROGRESS BAR

The Long Progress Bar is part of Lighthouse’s monthly Progress Bar series and builds on its former annual conference of contemporary culture, Improving Reality. It is part of Brighton Digital Festival – a month-long celebration of digital culture, made up of events, exhibitions, performances, workshops, conferences and meetups that take place in venues and outdoor spaces across the city throughout September.

Lighthouse is a contemporary culture agency connecting new developments in art, technology and society. It is a registered charity that supports radical new work and ideas by emerging and established creatives across the globe. The Long Progress Bar is a non-profit event supported by Brighton Digital Festival, Arts Council England and Brighton and Hove City Council. 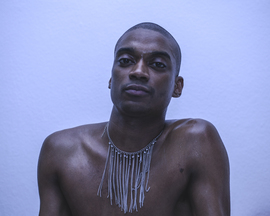 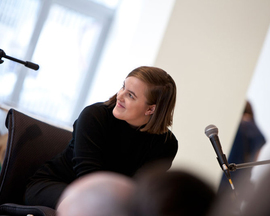 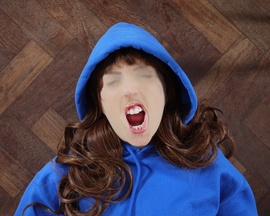 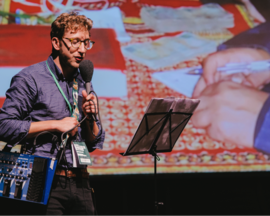