Lighthouse and Arts Santa Monica in Barcelona present a new artwork by Brighton-based artists and filmmakers, Semiconductor, commissioned in 2011 for the exhibition, Invisible Fields: Geographies of Radio Waves in Barcelona. 20Hz shows us the relationship between radio waves and sound. The commission is supported by the British Council.

20 Hz from Semiconductor on Vimeo.

20 Hz is a 5 minute video which uses data collected by the CARISMA radio array. CARISMA (Canadian Array for Realtime Investigations of Magnetic Activity) is an array of magnetometers which study the Earth’s magnetosphere. 20 Hz is an interpretation of a magnetic storm occurring in the Earth’s upper atmosphere. The CARISMA data – captured at the frequency of 20 Hertz – is interpreted as audio, allowing us to hear the “tweets” and “rumbles” caused by the interaction of solar wind with the Earth’s magnetosphere. The visual element of the film is generated directly by the sound. Tangible and sculptural forms emerge suggestive of scientific visualisations. As different frequencies interact both visually and aurally, complex patterns emerge to create interference phenomena that probe the limits of our perception.

The film went viral, being featured in dozens of blogs around the world, being selected as a Staff pick on Vimeo, and has had over a quarter of a million views online. It was awarded the inaugural Samsung Art+ Prize in 2012. There has also been a great deal of positive critical feedback. Director of The Arts Catalyst, Nicola Triscott has described the piece as “visually reminiscent of some of Woody and Steina Vasulka’s experimental video works”.

Invisible Fields
It was commissioned for the exhibition, Invisible Fields: Geographies of Radio Waves which showed at Arts Santa Monica in Barcelona from October 2011 until March 2012. Featuring over a dozen international artists, the show explored how our understanding of our world and our cosmos has been transformed by the study of radio waves. With the invention of telecommunication technology at the end of the 19th century, the radio spectrum became a tool for rethinking the world we live in. Radio collapsed geographical distance, crossed borders and cultures, became a powerful catalyst for commerce and enabled scientists to study the cosmos in entirely new ways. Yet whilst the radio spectrum is the invisible infrastructure that enables the technologies of information and communication, most people are unaware of the way it works, how it is managed, and how it is has shaped our understanding of our lived environment. Invisible Fields shed some light on this enigmatic landscape.

About the Artists
Semiconductor is Brighton-based artist duo, Ruth Jarman and Joe Gerhardt. 20Hz is emblematic of their ongoing investigation of the natural world, which has resulted in major works on astronomy (Brilliant Noise, 2006), and geology (Worlds in the Making, 2011). In 2011, Lighthouse curated Solar Systems an exhibition of Semiconductor’s astronomy-themed work. Their unique approach has won them fellowships and residencies in significant scientific locations such as NASA’s Space Sciences Lab, the Galapagos Islands and the Smithsonian National Museum of Natural History. Their work is part of several international public collections and has been exhibited globally including Venice Biennale, The Royal Academy, Hirshhorn Museum, BBC, ICA and the Exploratorium. 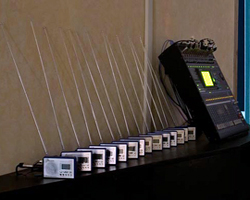 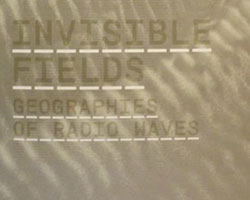 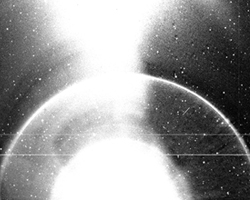