After an exhibition at the Open Data Institute in London, and at the FutureEverything festival in Manchester, we are bringing a selection of the works to Lighthouse, as well as hosting two accompanying events.

The Data as Culture programme explores the wider implications of the culture of open data on culture itself, to challenge our understanding of what data is, and how it may affect and reflect our lives. This commission explores our relationship with surveillance, privacy, and personal data, taking a critical and sometimes comedic look at the power of open data.

Data as Culture wants to ensure conversations about open data expand beyond specialist communities and through to the general public. Using data as a material increases awareness of what data is, how it can be used creatively, how it can inspire, encourage play and lateral thinking, and help people share stories and experiences.

’The question of ownership over data, personal and public, is understood as a question of authority. It is this tension between secret agents and personal agency that the exhibition attempts to explore.

‘Gaining access, authorised or otherwise, to the devices and networks that are used to record, measure and order the world, the artists employ a range of strategies to expose and share data, while interrogating the accessibility of the gathered information and the potential for claiming it back as public knowledge. Works in the exhibition move between the direct and the poetic, the representational to the abstract, attempting to visualise the invisible, interrogate the impenetrable, and give human scale to the monstrous volume of information.’

Much of James Bridle’s work deals with secrecy surrounding drone warfare. Turning his lens back at the watchers, Bridle presents a series of prints showing military drone bases, exposing the all seeing eyes used by armies worldwide with the help of Google Earth.

YoHa’s (Graham Harwood and Matsuko Yokokoji) project, Invisible Airs, invites viewers to experience council spending data through a series of pneumatic contraptions, moving with every entry of over £500. Visitors’ physical reactions become part of the piece as the machine perform their useless choreography.

In another participatory piece, art collective thickear utilised the visual and performative language of bureaucracy to collect personal data in exchange for a signed art form. Copies of the data were analysed and installed during an administrative office intervention, with the degraded remnants of the data presented here before their irreversible destruction.

James Brooks takes the liberty to transform real official information from the practical to the fantastical in a final act of data subversion. Arranging EU embassies telephone numbers in fictional call logs that may never happen, he creates new narratives out of static data, presented as abstract modernist compositions.

The entire project is represented again through Paolo Cirio’s web piece which, challenging and subverting the format of a catalogue, exposes visitors’ digital fingerprints as they look at the work. Coercing viewers into participation, it uses live generated metadata to create transmuted images of the exhibition.

Data as Culture is a co-commission with the Open Data Institute and FutureEverything. 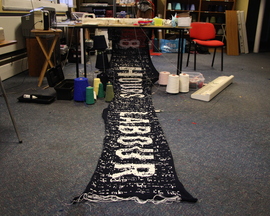 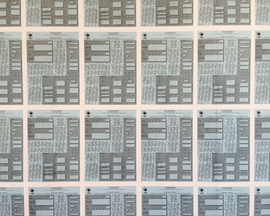