From concerns about mass surveillance to the merits of different Moomins, there’s nothing predictable about a conversation with Lighthouse’s new artistic director Juha van ‘t Zelfde. Five months into the role, he talks to Nione Meakin about air bases, ethics and inspiration.

The literal English translation of my name is Johnny Likewise. You could try pronouncing as ‘you-ha fan at self-the’ but the jury will accept anything that sounds like ‘selfie’.

I grew up in Soest, a small village in the Netherlands, in a house that was just a few kilometers away from the Cold War American air base Soesterberg. As a child I was awed by the sound of F-16s flying by, and the sight of military vehicles made a huge impression on me. The older I get, the more I am intrigued about the architectural presence of this invisible infrastructure of war.

I describe my occupation as a cultural organiser, making things public and connecting people. I started out as a DJ who used the web to discover and share music. That experience fed into helping museums such as Amsterdam’s N8 to engage with new audiences. I later began working with designers and developers to build services that imagined ways of interacting with architecture in the city. In the past five years my work has included co-directing a space for urban culture (De Verdieping), running club nights and festival stages, working on Shippr – a ‘Foursquare for ships’ – and curating exhibitions of contemporary art (Dread).

I discovered Lighthouse two or three years ago when I came across Semiconductor and then the Trevor Paglen exhibition. It seemed to me an incredibly interesting arts organisation, operating as it does across the ever-mutating domains of contemporary art, design and technology. Honor [Harger, Lighthouse’s previous artistic director] had always spoken highly about the team and the space, about the artistic opportunities and the moral impetus – she gave off a contagious energy. So when the opportunity arose to have a stake in its future, I decided to apply.

Having a studio at the centre of the organisation not only puts the focus on the continuously evolving practice of creatives, but it also shapes our programmes in an interesting and experimental manner. I’d like Lighthouse to continue being light on its feet, without losing its supportive structures. Long-term vision and dedication is a very important part of Lighthouse and essential to its continuing development.

What excites me about working here is the moral commitment to the arts and to society in a time of crisis. Our lives are continuously being shaped by the acceleration of technology – for good and for bad – and the artists we support share a sense of urgency about what is at stake, including our privacy and freedom. Although I love my iPhone, Twitter and Instagram, I reject capitalist realism, mass surveillance and drone warfare – I sometimes feel people are using new technologies to repeat old mistakes. Our programme explores these complexities, and the vital role that art and culture have in improving reality and articulating other futures.

I currently divide my time between Amsterdam, where I live with my girlfriend Guusje, and Brighton, where I catch up with Guusje on Facetime. I love Brighton. It feels a bit like a combination of Amsterdam and Helsinki – very friendly and laid-back.

My favourite Moomin? I thought you’d never ask. I’d have to go with Mörkö. Did you know he has his own music in the TV series? Look it up on YouTube, it is alarming and attractive. Maybe that is why I like that character the most: he is a symbol of dread. Moomins are key to understanding the Finnish psyche – it’s that mix of melancholic existentialism combined with everyday wisdom and jokes.

There are a few people who’ve influenced the path I’ve taken in life. My old Lantaren/Venster boss Kadir Selçuk was the first who believed in me and encouraged me to take risks and go out into the world; Bimhuis director Huub van Riel inspired me to trust my instinct; the legendary Stedelijk Museum director Willem Sandberg taught me the importance of being open-minded towards all avant-gardes. My girlfriend, parents and my 103-year-old grandfather keep demonstrating the importance of humour and a good spirit. I think I am easily inspired.

Juha van ‘t Zelfde’s artistic vision for Lighthouse has a particular emphasis on music and sound. His last co-curation before joining Lighthouse was Undertones, an audio-visual tour of Maastricht’s underground spaces which has just opened at Marres. 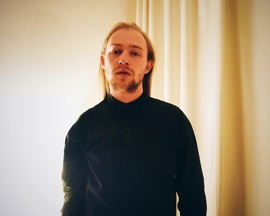 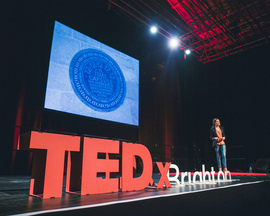 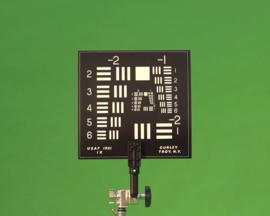